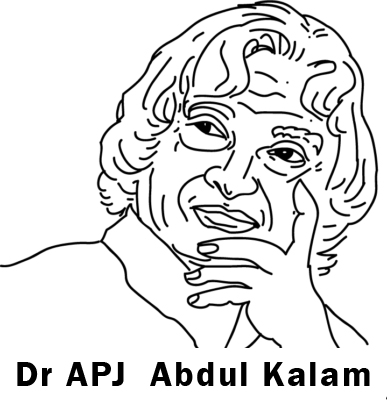 Jainulabdeen and Ashiamma did not know that their son could grow up to be the first citizen of India.
An Indian scientist and administrator Kalam served as the 11th President of India from 2002 to 2007. He contributed a lot to the Indian Space Research Organization (ISRO). He was responsible for many projects, such as Project Devil, Project Valiant and the launch of the Rohini – 1, He also helped to develop missiles under the missions Agni and Prithivi. For this, he was popularly called the “Mission Man of India”.

Dr. Kalam’s life is an example of how one should lead his/her life. He inspired a nation of 1.2 billion like very few others. His contributions to India are immense, but he led a very simple life.

His life in one sentence would be “Simple Living and High Thinking”.

APJ Abdul Kalam – A True Inspiration for Everyone

Dr APJ Abdul Kalam is an inspiration to many. He was a very kindhearted person. We have compiled a few things from his life read it and get inspired!

1. Dr. Kalam left his money to a trust that he found called PURA (Providing Urban Amenities to Rural Areas).
2. Dr. Kalam once requested the officials at the Charles, de Gaulle airport in Paris, to allow a group of scientists from the Indian Space Research Organisation to wait in the VIP lounge, even though they had economy class tickets.
3. He dreamt of making the Rashtrapathi Bhawan run solely (fully) on solar energy, becoming the first home in India to do so. He started working on a report proposal for this, but before he could work it out with environmental agencies, his term ended.
4. As President, he once had to go to Thiruvananthapuram to Vikram Sarabhai Space Centre, where he used to work. While there, he took time off to visit a cobbler, George, and a hotel owner, Parmeshwaran, whom he had known there.
5. It is said that though the Union Cabinet disapproved, Dr. Kalam convinced Indra Gandhi when she was Prime Minister that an advocate missile program was important for India, and she helped fund his projects.
6. While working at the Defense Research & Development Organization, Dr. Kalam’s employee requested to leave work early to take his children to an exhibition. When the employee got caught up in work, Dr. Kalam’s went to take the children instead.
7. The night before he was to go to a college event as a Chief Guest, Dr. Kalam went to the college to see the preparations for the fest and meet  the students who were working on it.
8. While working at the Defense Research & Development Organisation, Dr. Kalam rejected the idea of placing broken glass on the walls as a security measure. He said that it would dangerous to birds.
9. During the speech soon after he became a President, the power went out – but Dr. Kalam walked into the crowd and continued his speech without a microphone so that would be no interruption.
10. He once slightly late to an event at IIM Ahmedabad because he was with many children who wanted to take their picture with him and he didn’t refuse.